In late June, I was in Ireland with my wife, Barbara, for another survey of the population of choughs (Pyrrhocorax pyrrhocorax) on Valentia Island in South Kerry. We have been conducting surveys of this population of choughs for more than a decade, because in terms of conservation biology and ecology, it is one of the most important in Western Europe (http://naturalhistory.go.randolphcollege.edu/2013/07/08/chough-research-in-ireland/). 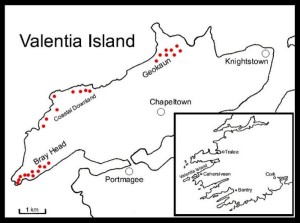 We had exceptionally fine weather for our work this year and were able to conduct 12 censuses, involving more than 100 kilometers of hiking and driving in the three key areas of chough habitat on the island. As in the past, choughs were most abundant on the public grazing lands on Bray Head at the western end of the Island. We saw only a pair each on Geokaun (the highest point on the island) and the Coastal Downlands, however.

Overall, choughs numbers have been lower for the last four years. This may be the result of a series of hard winters, but increased development on Geokaun, as well as development and a reduction in grazing on the Coastal Downloads on the northern side of the island, may have been contributing factors.

Valentia Island, the home of the choughs we study, is small (11 km x 3 km), but has an impressive history. The first transatlantic telegraph cable was laid between Newfoundland and Valentia in 1866 and for the next century Valentia was an important center for communication between Europe and America. Among many other notable facts about the island, slate mined on Valentia was used in the British Houses of Parliament, as well as many other notable buildings in London, and in 1993 the tracks of a 385 million year old amphibian were found in a coastal area not far from the slate mine.

A few miles offshore from Valentia are the Skellig Islands, two giant pyramids of rock. Skellig Michael, the larger of the two islands, is a World Heritage Site, because of the extraordinary remains of a 5th Century Christian monastery on its summit. The slightly smaller Little Skellig is home to more than 25,000 pairs of nesting gannets.

In addition to Valentia Island’s ecological and historical significance, it is one of the most beautiful places on earth. We are hoping next summer will bring an increase to the island’s chough population!